Art for the People

We wanted to find ways for Coventry people to have a say in how our city views, values and uses arts, culture and creativity, so we called (what we think is) the UK’s first Citizens’ Assembly on Arts and Culture.

Fifty residents were selected from across the city to explore the question: “How will arts, culture and creativity shape a better future for Coventry?“

The Assembly participants worked together over a period of six weeks. They listened to the varied opinions of expert witnesses, and they also listened to their peers – people they had not met before taking part in the Assembly. They debated together – discussing the issues, talking about change. They imagined a better future for our city and drew up, and voted on, a series of recommendations, which you can read online here, or download in PDF format here.

The recommendations made by the Citizens’ Assembly clearly sketch a better future for Coventry: one which is green in every sense and offers a democratic, regenerative, generous, equitable and collaborative life for all its citizens; where there is a real democracy of access to the arts as creator, participant and audience; a city that is a pleasant place to live – verdant, green, welcoming and future-facing; and where the arts are fully integrated into all communities.

The big question after doing something like this is – well, what happens next? How do we move forwards and make the changes we want to see?

The Assembly’s recommendations have been presented to Coventry’s Cultural Compact and some of the ideas have been incorporated into the city’s Cultural Strategy refresh. Talking Birds is now working with Assembly members, to create pilot projects that test out the recommendations in neighbourhoods across Coventry, and start the work of making the Citizens’ vision a reality. (We’ll share more on these as they happen).

Have a read of the Citizens’ Assembly recommendations, and imagine yourself living in the city they describe – how does it feel? We’d love to know what you think!

We are a Coventry-based company of artists known for our gently provocative projects which explore, and seek to illuminate, the profound and complex relationships between people and place. We’re big on access, human connection, social and ecological responsibility, and on nurturing the next generation of artists and theatre makers, particularly in Coventry.
Find out more about us here…

Blog: Words from the Birds

Could you make a donation? 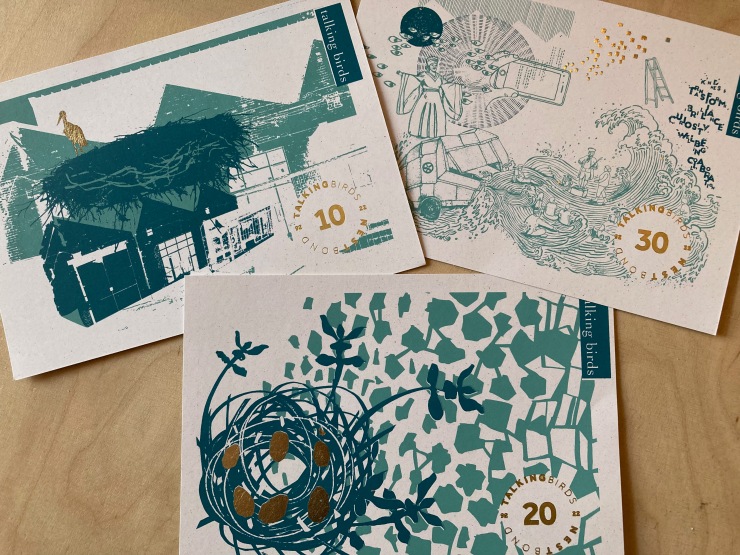 If you can afford to pledge something to support our work at The Nest, it would be hugely valued. Or if you buy a Nest Bond, you’ll get a stunning limited edition print in exchange for your donation.

Talking Birds is values driven and actively working for change - in our own work and through our support for Culture Declares Emergency & More Than A Moment. Find out more about what drives us here: Our Six Big Ideas.